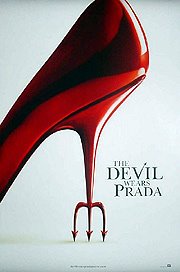 
I thought this was funny. Meryl Streep was the best part of the movie. Emily Blunt and Stanley Tucci were great. Anne Hathaway is not my favorite actress, but she did okay in this one.

Overall, I recommend it, with the cautions listed below. It's definitely a chick flick. Most men would only tolerate it.

I had to laugh when Miranda Priestly comes in, dumps her stuff on Andy's desk and says, "Where is that piece of paper I had in my hand yesterday...?" I've been heard to say the same thing to my own assistant.


Cautions:
Language: Some mild swearing. It's not intense or angry, but along the lines of someone saying, "dang, dang, dang..." when they've forgotten something, but that was not the word used.

Sex: Andy Sachs lives with her boyfriend, but we're not forced to watch anything more than kissing. She does show him her new underwear and they head off to the other room, but no naked bodies. She also gets drunk in Paris and goes home with another guy. Again, we're not forced to watch it, but it is implied.
Posted by Karlene at 9:11 PM 1 comment: