Disclaimer: Right up front, I want everyone to know two things. 1) I consider Rebecca Talley a friend and she gave me a copy of Aura with the understanding that I would do a review, IF I liked it. But friend or not, I don’t give good reviews to books I don’t like; and  2) I designed the cover for AURA. Rebecca and I worked together on it, sharing ideas and tweaking things. But that doesn’t mean I have a stake in the success of the book. These two things may have influenced my decision to read the book, but not my decision to review it, nor what I say about it. Now, on to the review.

I love YA paranormal. Some of my best friends are characters in YA paranormal books--Evie (Paranormalcy), Nikki (Everneath), Claire & Eve (Morganville Vampires), Clary (Mortal Instruments), Buffy... I even liked *cough* Bella (Twilight) *cough*

But there are some things I DON'T like about YA Paranormal:
Every time I hit one of these issues in YA Paranormal, I want to scream!

But fortunately for my sanity, there was no screaming when I read AURA by Rebecca Talley.

(Except for maybe a couple of places, where it was plot appropriate).

(And it was more like a squeak, not a scream.) 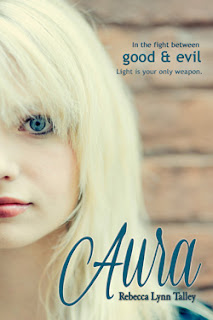 Here’s a description of the story:


In the fight between good and evil, Light is your only weapon.
Crystal Scott finally feels like a normal teenager. She has a lead in the high school play, a best friend, and a gorgeous boyfriend. With prom only a few days away, Crystal’s ordinary life seems perfect.
.
Endowed with great Light because of her virtuous choices and her inherent gifts, Crystal’s aura has become visible to those with the ability to see auras. Unfortunately, her power has also attracted the attention of demons intent on destroying all Light.

When Vincent Crandall, the human host for a powerful demon, discovers that Crystal’s Light is strong enough to disrupt the connection between demons and their hosts, he realizes she may be able to sever the connection altogether. Determined to stop her from interfering with his plans to rule the world, he sends operatives to neutralize her Light.

After the operatives fail to disable Crystal, Vincent decides he must harness her power for himself. He kidnaps her parents, and Crystal is thrust into battle against a demon army she didn’t even know existed. With the help of a mysterious young man and his mother, Crystal must learn to use the power within her before Vincent kills her parents and exploits her Light.


Here’s what I liked about Aura by Rebecca Talley:

First, Crystal is a normal teenager. That means she’s not perfect. But she’s also not hugely flawed. She has NORMAL flaws, unlike like a lot of YA characters these days who have so many issues you wonder how they’re even functional.

Crystal also has normal parents. Yes, they have some issues but they don’t beat her or otherwise mistreat her. They’ve been good parents, doing their best to teach Crystal to be a good person. I get tired of all the YA today where parents are either caricatures or non-existent. Talley does give us examples of bad parents, but not for the main character. Refreshing.

Yes, there’s violence—and sometimes it’s a little icky and creepy (squeak), but we are talking about demons here. Bad guys to the Nth degree.  The bad guys do need to be believably bad—and they are—but it’s not gratuitous.

I didn’t find any plot holes or world-building problems. If there are some, then I missed them because I was  too engrossed in the story. And that’s a good thing, right?

As for the love triangle, nope. And sex? Double nope! I could hand this book to any teen girl I know and not be embarrassed if their mother found out. In fact, I could give the book to MY mother. (Except she doesn’t really like the paranormal stuff.)

Crystal is my new BFF. I really liked her in AURA and I hope to read more about her in a sequel or two. (No, that’s not a product announcement, just a hint to Rebecca.)

I’m really glad to have found a GOOD paranormal read that I can share with others. Oh, and it's only 99¢ for the Kindle version on Amazon right now!

If you’re interested in learning more about AURA, Crystal, or author, Rebecca Talley, you can visit:

Open only to those who can legally enter, receive and use an Amazon.com Gift Code or Paypal Cash. Winning Entry will be verified prior to prize being awarded. No purchase necessary. You must be 18 or older to enter or have your parent enter for you. The winner will be chosen by rafflecopter and announced here as well as emailed and will have 48 hours to respond or a new winner will be chosen. This giveaway is in no way associated with Facebook, Twitter, Rafflecopter or any other entity unless otherwise specified. The number of eligible entries received determines the odds of winning. Giveaway was organized by Kathy from I Am A Reader, Not A Writer http://iamareader.com and sponsored by the author. VOID WHERE PROHIBITED BY LAW.


a Rafflecopter giveaway
Posted by Karlene at 1:44 PM 1 comment: