Give Books for Christmas Giveaway Hop! 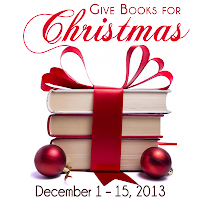 I'm doing the Give Books for Christmas Giveaway Hop!


Hosted by NewLDSFiction.com
Why? Because it just isn't Christmas (or birthday, or anniversary, or Valentine's, or Halloween, or…) unless you give/get a book or two.

I always give my grandkids a book for Christmas. I love picking out a story just for them—one I think they'll enjoy and treasure.


I hope YOU will consider giving books
as Christmas gifts this year.

And I'm setting an example by selecting four lucky winners to receive a copy of any one of my  four Christmas game books! (You get to pick which one you want!) 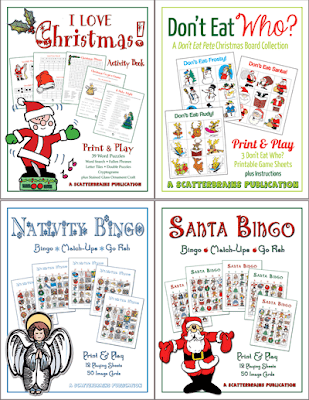 These are downloadable pdf files that you can print at home.


But I'm giving you a jumpstart. You can enter today!

To enter to win, just use the Rafflecopter form below.
I'll pick four winners on December 16th and
email the book you want right away.

This giveaway is open Internationally.


And P.S. When you go to my website, ignore the fact that it's missing info and descriptions. I crashed it on Wednesday and I'm frantically rebuilding everything.


After you enter, hop on over to these other
blogs to enter to win more fun books!
Posted by Karlene at 10:09 AM 8 comments: 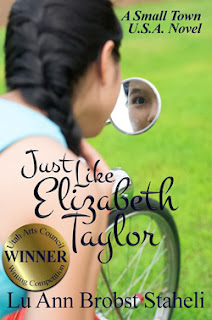 Just Like Elizabeth Taylor is an excellent read for girls who need to know they can be brave.

Here's the back copy:


Twelve-year-old Liz Taylor has known for a long time that she would escape—escape the abuse against herself, and against her mother. She just didn’t know how or when.

Then the perfect opportunity comes—money left of the table by her mother’s abuser—and Liz is on the run. But a girl her age doesn’t have many options when it comes to hideouts, making a K.O. A. Kampground and a nearby middle school her perfect choices.

If only she can keep to herself, Liz, now using the name Beth, knows she can make it on her own, until things change, and she realizes she must face her situation head on if she is to save herself and her mom.


This book deals with some tough issues—specifically abuse by a stepfather. I hate that we need books like this in our library, but I believe that we do. I was lucky. I had kind and loving parents. But as a young girl and teen, I had several friends whose parent (one or the other or both) regularly beat the crap out of them. I was too young back then to know what to do. I didn't even realize that I should tell someone about it. Perhaps if I'd read a book like this, I would have known to involve my parents and help them.

In listening to my children as they grew up, I know they had friends who had to deal with abuse too. And I see it in public all the time. If an adult will jerk a kid's arm or smack them in public, you KNOW they're doing worse in private. So given the fact that abuse occurs in our community, I think teen literature needs to deal with it.

Lu Ann Staheli has done a wonderful job in stating the problem without going overboard with all the gorey details. For that reason, I'd feel comfortable letting a mature 12 year old read the book (or even younger if I thought they were in this situation), and the content would be fine for readers 14 or older.

The book is well written. Liz, the main character, is well-developed. She's bright and brave; she's smart and creative. Her actions eventually save not just herself, but also her mother. And she reacts to the situation she's in very much like my friends did.

With one exception: She. Got. Out.

I think that's the great message behind this book, whether you're a 12 year old girl, or a fully grown adult. If you're in an abusive situation, GET OUT. This story has a happy ending, eventually, and clearly shows that there are loving and kind people in the world who will help you. If you have a friend in this situation, help them know that they have options.

The only concern I have about the book is that Liz solves her problem by running away. For her, it turned out okay. She was able to find a safe place to hide, to get into school, and to pretty much take care of herself. My concern is that other girls might not be so lucky. There are a lot of predators out there. So as a parent, this is a book I'd want to read first and then discuss with my child after they read it, offering alternatives to running away.

As far as quality goes, I give the book 4.5 stars and I recommend it to pretty much every girl 12 and up because you never know who might be hiding an abusive situation like Liz's.

*I received a free ebook copy in exchange for an honest review.
Posted by Karlene at 5:08 PM No comments:

Review: The Witnesses by Stephanie Black 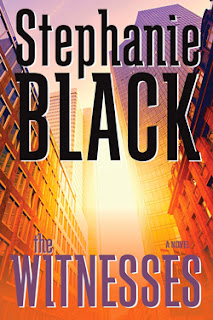 I am so far behind in writing promised book reviews. I have no excuse except… um… life. But I’m working to remedy that right now.

I got my copy of The Witnesses by Stephanie Black the second day of Black October.

(That’s what I’m calling it because I was sick all month.)

I was sooo excited to get it because it’s the sequel to The Believer (see my review here). I couldn’t read it right away because I was too sick, but believe me, the minute my germy fingers had the strength to turn the pages, I opened the book and was immediately sucked into the tribulations of New America.

(And just a side note, apparently I was sick when I read The Believer 7 years ago. I am certain I was secretly injected with nano-bacteria both times in an attempt to keep me from reading these books, which are a warning to all about secret combinations and plots to take over the government. I blame Marcus and his terrorists.)

(Okay, I am really not a conspiracy nut. That would be funny if you’d read the book. And you should. Read the book, that is.)

Here's the back copy:


Welcome to New America, where patriots are traitors and religion is a crime.

After government agent Daniel Lansbury fakes the executions of three believers on national television, he and the fugitives Alisa Kent, Ian Roshek, and Ian’s sister, Jill, face the perilous task of outwitting President Amanda Ryce and her power-hungry Council long enough to escape to freedom.

While a government reformer is on their side, rigorous new security measures thwart any chance of aid. And Daniel’s estranged father, Marcus, an underground terrorist leader, is hatching plans to sabotage the breakable trust between Daniel and Ian and put himself in power at the head of the nation.

As faith and loyalties come under fire, the fugitives struggle to stop Marcus and his zealous terrorists and bring to light the wrongs committed against the citizens of this fragile, fledgling nation.


You might remember that in my review of The Believer, I mentioned a couple of glitchy places. There were no glitches in this book! I loved every single fast-paced, action-packed word of it!

I loved the characterizations in this story. They all rang true for me. I especially liked Alisa Kent, former hard-case enforcer, now shattered by guilt and the mind-bending drugs given to her by the government she helped protect. Her journey to healing was inspiring. I also really liked the character of Amanda Ryce, power-hungry president of New America. I found her scheming commitment to self-preservation well written and believable. And Daniel—oh, man. Poor guy. He was so conflicted, I wasn’t sure which way he was going to turn.

The pacing was fast. Really fast. Most of the time I like a breather every once in awhile, but this worked. I felt like I was right there on the run with Ian, Alisa and Jill.

Stephanie Black has done it again and The Witnesses gets 4 ½ stars from me. Fool Me Twice is still my favorite Stephanie Black novel, but only by a hair.

I received a free copy of The Witnesses in exchange for an honest review.
Posted by Karlene at 9:42 AM No comments: