I was one of the lucky ones to get an ARC of Farworld: Water Keep by J. Scott Savage. I looked forward to reading it because I've really enjoyed his Shandra Covington series (House of Secrets and Dead On Arrival). I love fantasy so when the package came, I ripped it open and started reading right away. I've had to wait to post my review—and that's been hard because I've wanted to share the love for the two main characters in this book. 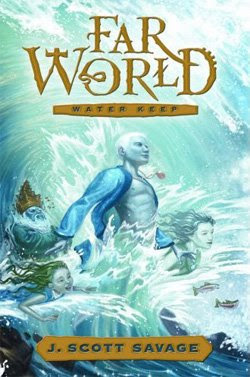 Water Keep is the first in a series of five fantasy novels written for middle grade readers, although older teens and adults may also enjoy it. Savage has created two unique main characters—Marcus, a disabled boy who uses a wheelchair and lives on Earth, and Kyja, a magically disabled girl who lives on Far World. Together, Marcus and Kyja begin an adventure to save both worlds from the Dark Circle, an evil brewing in Farworld that will also impact Earth. In this book, they begin that adventure by journeying to Water Keep, in an attempt to convince the water elementals to help them save the world.

Along the way, they must face attacks from "...Summoners, who can command the living and the undead; Unmakers, invisible creatures that can destory both body and soul; and dark mages knows as the Thrathkin S'Bae." Pretty creepy. Not only that, they must deal with bullies, feelings of inadequacy, and learn to jump between their two worlds.

The theme for the Scott's blog tour is "Find Your Magic" and I think that's the main message of this book. We each have our own kind of magic and it's important for us to discover what it is and learn to bless the world with it. That's a message everyone needs to hear.

Scott Savage agreed to take time out of his very busy schedule to meet me for a short interview. We chose to meet at the meadow with the dawn chimes at 6:00 a.m. this morning. Since sunrise occurred at 6:12 a.m., I was able to see and hear those absolutely beautiful dawn chimes greet the morning. I brought a basket of fruit for breakfast—some bananas, grapes, plums and assorted berries. We spread out a blanket on a small hill that overlooked the meadow and talked as we waited for dawn.

So, Jeff, isn't this one of the most awesome places on Farworld? It's gorgeous here.

This is one of my favorite places to come, and with a breakfast of fresh fruit even. We better talk quick though so we don't miss the dawn chime's song. Marcus is much better at translating them than I am. But I'm working on it.

You call your elementals water, land, air and fire. Why didn't you use "earth" instead of land?

Well, you know, the whole earth thing has been so overused. I was even considering water, air, fire, and hand lotion. But it just didn't have the same zing.

Hand lotion? Really? Did you know that I make custom scented hand lotion? Maybe I'll create one for Farworld.

Whatever. Okay, seriously, it's because earth and Earth are the same word. I don't have a problem with calling a horse a horse on Farworld—even if it does tell jokes.

And pretty lame ones at that.

[Throws a grape at me.] Geez. You like to interrupt a lot, don't you?

Do you want the answer to your question, or not? Anyway, it seems to me that on a planet not named Earth, the land should not be called earth. It could get too confusing. I don't even have anyone from Farworld use that word in the book. 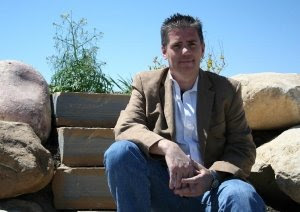 Did you have to do a lot of research to see what Marcus would and wouldn't be able to physically do? Did you try doing some of those things yourself with his limitations? (I'm picturing you scooting down a busy street in New York.)

Not down a New York street. But I actually did scoot across my floor and out in front of the house. The neighbors already know I am weird. I did get some great advice from people who do have disabilities though. For example, I originally had Marcus crawl. But everyone I talked to told me that it is too uncomfortable. They scoot instead.

Are we going to see more Ishkabiddles in future books? (I love that name.) Like I was thinking maybe in the final scene of the final book, Marcus is about to be destroyed by the evilest person of the Dark Circle and an ishkabiddle could pop up and bite the bad guy on the ankle, giving Marcus the chance to regain his bearings and finish off the bad guys... (you don't have to pay me a royalty for that idea, but an acknowledgment in the book would be nice.)

Oh, yeah, the killer Ishkabiddle scene—it's going to be huge. I didn't originally plan on more Iskabiddles. But demand has been surprisingly strong. So you probably haven't seen the last of them.

Has there ever been a water elemental that couldn't swim?

Only one. His name was Bob.

How long, start to finish, did it take you to write this book? What is your writing schedule like?

Are there any questions you've been dying to answer, but no one has asked them yet?

I'm surprised no one has asked about why I went with two full blown protagonists and whether or not that was hard to write. The answer is that I didn't want this to be a boy book or a girl book. I wanted Kyja and Marcus to each rise and fall, so to be a sidekick to the other. I tried to write very carefully so that no one would feel Marcus or Kyja was the "main" character. You know, I was really planning to—


Scott continued to babble about his book, his writing career, and what's coming up next for him but I tuned him out. I was too busy watching the loveliest little purple flowers rise out of the meadow grass. The tiny blossoms that look like bells began to chime. It was the most beautiful thing I've ever heard. And their fragrance! Aaahh.

I didn't want to leave, but Scott had an appointment at another blog. He said I could stay at the meadow as long as I wanted, but I was afraid a Summoner might appear at any moment, so after he left, I quickly packed up what was left of our breakfast (which wasn't much; Scott has a healthy appetite) and scurried out of there. Sigh. I really hope that Marcus and Kyja are successful in their fight against the Dark Circle because Farworld is such a lovely place to visit.

You can read sample chapters HERE.

But before I left, I swiped two things which I will give away to two lucky commenters on today's post:


To win one of these prizes,
Visit Scott's blog to discover who said, "Magic is not just spells. The magic you see on the outside—making pots and pans fly or brewing potions to make boys swoon before you—is but a tiny fraction of the power of true magic. The real power of magic lies within you. Who you are, what you do, and most importantly of all, what you may become."

Leave a comment before midnight, Sunday, July 20th, stating the name of the person quoted and tell me which of the two prizes (manuscript page or small vial of dawn chime fragrance) you'd like to win.

I will select two winners completely at random and post them on Monday, July 21st.
Posted by Karlene at 6:30 AM

sounds like a cool book and what a neat place to have an interview but it's hard for me to believe you were there at 6:ooam....

Fab interview! I agree you're nuts to have gotten up that early though. I got to sleep till 2pm the day of my interview with him. Neener neener neener!